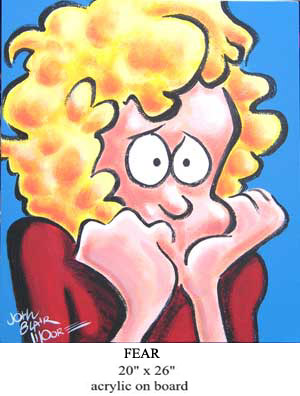 Fear can be gripping.

Fear can make you S T O P in your tracks and simply paralyze you -- in your physical, emotional and mental abilities. Growth is thwarted, as a result.

I've suffered from many fears in my life, some more legitimate than others, some self-induced, some I've overcome, and some I'm still stuck in the mire with.

Whenever I overcome a particular fear, I'm thrilled. It's like "a small step for mankind."

This past week, I set aside a fear of mine and took some action. Okay...so it wasn't immediate action; that would have meant that I took some action two to three weeks ago at least. But I did what I'd intended to do, albeit several weeks down the pipe.

Some time ago, I opened my mouth with a suggestion to somebody who'd re-released a delightful Chanukah book (food for another post) that perhaps I could write a piece for a local, Canadian Jewish newspaper, so that the writer would get some Canadian exposure. He liked the idea, his publisher liked the idea, and I posed an article to a particular editor of the paper in such a way that he'd like the idea. I said this article should be written, whether by his own staff member or by me. Of course I hoped he'd want me to write it. And even as I said, "Okay, I'll do it," I was afraid. Had I just bitten off more than I could chew? I couldn't help but wonder.

I've always told and continue to tell people "I write. I'm not a writer." Now some of you who know me might claim a difference of opinion, but who knows me better than myself?

And because I did think I had bitten off more than I could chew, I put aside this assignment, not ready to tackle it. I hadn't been given a definite deadline for the piece, but it would make sense that if it was about a Chanukah book, then it should be submitted in time for a Chanukah issue. I was even ready to throw in the towel, contact the editor early this week and give some lame excuse why I couldn't write the piece, but that I have some PR material and the book and that I could pass it on to a newspaper staff person to write the piece. And then I thought, I've given in to the fear already for a few weeks,and enough was enough, and just do what I'd planned to do.

And so I, who doesn't know much about journalism, contacted the publisher, the marketing person, the author, sent out some questions, and got some wonderful answers in return to help me write the piece.

I am a bit old-fashioned, and like to write my prose and poetry and ARTICLES in long-hand and later do them on the computer, so with lined paper in hand, and sharpened pencils (not pens!), I sat and began writing on late Wednesday morning, I believe, and finished and sent off my article by early Thursday afternoon.

I could've kicked myself; I'd probably missed the actual pre-Chanukah edition deadline, would be lucky if the piece would appear in the issue during the latter days of Chanukah. But moreso, I was somewhat unhappy because fear (of what to write, how to write it, how to start writing, how to "interview" my subjects long-distance) had struck, sucked me down for a while, and when it finally let loose of me, I was on a roll with the writing. It came relatively easy, felt as if I was just putting together pieces of a jigsaw puzzle to make the pieces fit evenly and correctly, and I actually enjoyed writing.

One thing I've noticed about my "journalistic" writing, in the few articles I've published over the years, is that I can never write boldly and coldly; everything I write has to have a human touch, a sense of warmth, a security blanket wrapped around it, which, at the same time is being wrapped around me. I hope the readers sense this style as I put it on the page. Perhaps it's my method of overcoming and tamping down the fear of writing for the public, of writing in styles that have not been learned, just exercised. Poetry is my thing; humorous essays are my thing; personal heartfelt essays are my thing; general interest articles are not.

Perhaps my fear makes me a better writer, makes me seek out how to leave a lasting impression on a reader. Perhaps my fear heightens my other senses, giving me a strong sense of clarity of what needs to be done.

In any case, my fear might've held me hostage for a few weeks, but on Thursday, when I emailed the editor an article that made me feel good, that fear was gone and contentment prevailed....
Posted by torontopearl at Sunday, December 10, 2006 6 comments: Links to this post