Something I Copied from a Display in Yad Vashem (the photo is an image off Google, though) 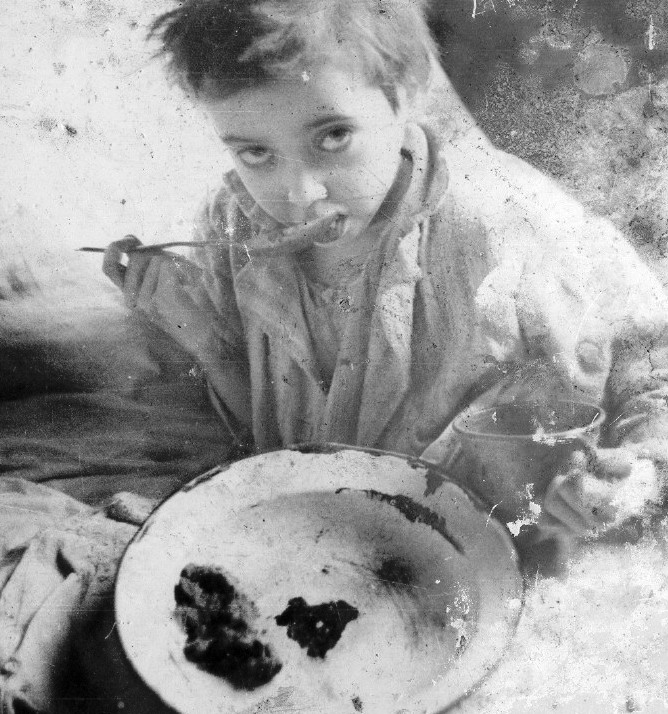 "Not the bridge, not the barbed wire,
Not even the gate is the symbol of the ghetto...

The symbol of the ghetto is the pot..."

--from the notes of Yosef Zelkowicz in the Lodz Ghetto
Posted by torontopearl at Tuesday, August 18, 2009 1 comment: Links to this post

We landed in Toronto about 6:30 a.m. on Sunday, got into our house by 8:00 a.m., and at 11 a.m. my husband and I were already back in the opposite direction suburbs (very close to the airport, as a matter of fact), to attend an unveiling of a family friend.

By the time we got back to the family member's street some time later, the house number had completely left my mind. My husband and I started to drive down the not-too-long street, and look for any house that had several vehicles parked nearby, and hopefully familiar ones. We parked and began to walk.

We passed a house and a man came out. I said to my husband, "That man was at the unveiling. This must be the house." But just to be sure, as he walked down the driveway, I asked if this was the F----berg home, and he said yes.

On the balcony outside was a basin of water to wash hands after the cemetery (we'd already done so outside our car), so we assumed this was the house. We walked in....

I began to look for members of the family or friends I recognized. Not a one in sight. No family photos on the wall either to indicate thiswas indeed the F------berg home.

My husband and I decided then and there we were no doubt in the wrong house! OY, with a capital O and Y !

How does one walk in and walk out within seconds without seeming obvious? Well, my husband ended up speaking to a person who looked like a homeowner, seemingly because we had "lost puppy" and bewildered expressions on our faces, and explained the situation. She smiled, my husband expressed his condolences to her, and she gave us directions to the correct house.

When we got to the correct house, we told our story. Someone topped it by telling a story of someone who went to the wrong banquet hall for a bar mitzvah, ate appetizers there, wished the bar mitzvah kid mazel tov on camera...and then discovered that they were at a bat mitzvah, not a bar mitzvah, and at the wrong hall.

I guess the moral of the story is: May we only share simchas!!
Posted by torontopearl at Tuesday, August 18, 2009 3 comments: Links to this post

Glimpses into the Holy Land

I just returned with my family from a two-week trip to Israel.

I haven't been to Israel in years...25 to be exact! So much has changed, so much has remained the same.

The physical landscape has changed, with new buildings and development throughout the country.

But the heart of Israel -- the Jewish nation -- remains. Every visible stripe of Jew can be found throughout. Every type of kippah and head covering adorn the heads of men and women. Tzitzit fringes flutter freely on men and boys of every size.

Jerusalem. The city of gold...and pink...and white...and blue. Magnificent, beautiful, striking and enveloping. Coddling us, as we coddle it.

People tell me that when they travel UP to Jerusalem, they are encaptured by an overwhelming rush of emotion, a pure happiness meant to sustain. I understand that myself now. A deflation of sorts happens as you drive down, out of Jerusalem, its scenery reflected in the rearview mirror.

To attend a wedding, with the backdrop of Jerusalem as the tableau, the bride and groom under the open-aired chupah, the glass being broken followed by a beautiful cantorial rendition of "Im Eshkachech Yerushalayim (If I Forget Thee, O Jerusalem)" takes one's breath away. As does the country. As do the sunsets. As do the Welcome signs.

Israel...IS Real.
Posted by torontopearl at Tuesday, August 18, 2009 5 comments: Links to this post