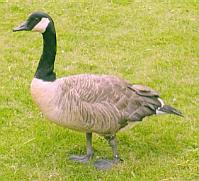 (I did not take these photos of the goslings or Canada goose. I had my camera phone and no memory in it to take photos at the time of the viewing.)


Sometimes I'm left to wonder why I do what I do, make the decisions I make. Hashgacha Pratis or Divine Intervention is, I guess, what makes it so.
Today was the simplest of those examples.
When I took my youngest to school, I also took Max along so that I could play ball with him and let him run around for a while in the park behind the school. About twenty minutes later I got in the car to drive home, and at an intersection, I decided to drive to another park not that far away and let him run there for a few more minutes and maybe get myself a coffee at a nearby coffee place.
When I reached that park, I saw several dogs running around and their owners milling about. I didn't know that dogs meet there regularly, as they do in some neighborhood nearby parks. A couple of the dogs, although in the distance, looked familiar and as we got closer, I saw that these were indeed two dogs that I met a couple of times last week and earlier this week...in the park behind my kids' school. This time they were with "the father" and I've met the dogs with "the mother."
I thought, "Gee...why did I decide to go to this second park (I never go there without my kids and/or husband in tow, and certainly not in the early morning) today of all days?" I just took it to be a coincidence, but I knew Max was happy with the two pals he'd befriended last week in his more familiar park.
On the drive home, I pass a pond, which is surrounded by a millionaire's row of traditional and ultra-modern homes. Oftentimes, I turn off the main street and take "driving tours" with my kids through these three or four streets to look at the architecture and decide which house we each like best. As I neared the pond, I suddenly decided that instead of going on the main street, I'll turn off and just go down and around the pond to look at the houses on my own. As I was turning onto the side street, I wondered why I'd suddenly had this notion -- was it a good thing I was taking a little detour, even wondering if perhaps I was going to avoid an accident or something by doing so. A few seconds later, I knew WHY exactly I'd turned off the main street. There, just ahead of my car, two Canada geese were ambling across the road -- one leading, the other in the rear of a family of five small, fuzzy goslings, two of which had to take a break for a short time, settling on the dirt road. I stopped the car, exclaimed "Awwww...." and felt like crying, just for the beauty of it all. I wondered if this was the first time they'd left the pond together as a family to explore the world, and I was witness to it, having been there just at the right moment.
I figured Hashem gave me a beautiful bonus this morning in this scene spread out ahead of me. I love nature and it's not every day that I get to see such a natural family scene "in the neighborhood."
I silently thanked Hashem for taking me off the beaten path for a few moments.
I hope you get to witness beauty -- natural beauty -- in your lives, and that you have the chance to appreciate it to its utmost.
Shabbat Shalom
Posted by torontopearl at Friday, May 04, 2007 5 comments: