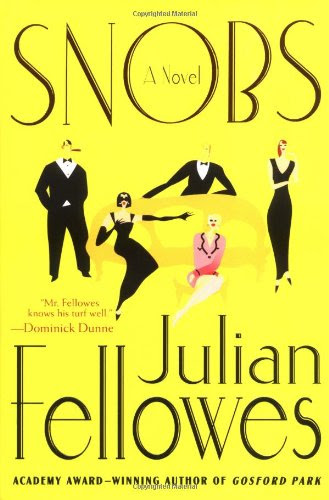 This is a book cover; it's the name of a piece of fiction.

This is a post; it's the name of a piece of non-fiction.

When I finished my high school studies in public school that had a 95% Jewish population, I encountered A LOT of snobs, or as we preferred to say, JAPS. (no Canadian version of that term)

The irony about these girls is that so many of them kept mirrors in their lockers so that they could look at themselves, at their hair, at their makeup throughout the day. Yes, they looked...but they did not see. They did not truly see themselves beyond their masks of artificiality. Or if they did see themselves, it wasn't evident that they cared how they were perceived.

A good indicator of this was when it came time to the graduation yearbook, and filling in grad forms. Many of these girls wrote under the caption "Pet Peeves/Dislikes": JAPS.

It is many years since I graduated high school. Snobs are still clearly evident around me. And it is not just women, but men, as well, who suffer from this very ugly disease.

The "snob syndrome" runs rampant in our synagogue; it runs rampant in our children's school. My husband and I are friendly, unassuming types. Just as he came to this city and said that he'd go out with any blind date he was offered (it's only a couple of hours, a cup of coffee, he claimed) because he had nothing to lose and much to gain, he is equally friendly to all. He nods hello or shakes everyone's hand at shul, and some of these men just pass him by or grudgingly give a limp handshake in return, often without even looking in my husband's direction. Is a simple gesture so difficult to undertake? Or he can see the same men weekly when he takes my son to his shul sports teams and although he's friendly and tries to have a conversation, he's generally excluded by many who just don't bother with him.

And women? Equally if not more nasty. You're lucky if you get a response to a hello. A limp handshake to your firm one. You're lucky if you get into a conversation, however brief, however superficial. But many times the other person is looking around to find someone "better" to talk to, and G-d forbid I should be in the middle of the conversation with one and someone else comes along; often I'm just ignored, hung out like clothing on a line and forgotten for a while.

A hello in return to mine might constitute a woman looking me not in the eye, but starting at the toes of my shoes, slowly working her glance up my body, over my outfit to the top of my head where my hat sits. Is she looking at me like I'm a Claiborne model on the runway and she's contemplating buying the outfit I'm modeling? I don't think so...

Is it that money walks and money talks? Is it a holier-than-thou persona speaking loudly in actions rather than words? Is it just that common decency is lacking, as in giving someone the time of day?

It is really unpleasant to be amidst men and women of this lowly caliber. My husband and I and our equally unassuming, decent and pleasant friends often discuss this issue. It isn't that we need to be "accepted" by these types, it's just that we'd like to be on the receiving end of common decency when we ourselves display it wholeheartedly.

What kind of examples are these people setting for their children? Perhaps it's an inherent characteristic, something learned from their own parents, which continued to rear its ugly head throughout their lifetime. Where is the derech eretz? You send your children to shul to learn to daven and "treat your fellow man as you'd like to be treated"; you send your children to expensive Jewish day schools and camps to learn derech eretz and positive behaviors and nice manners. Yet in the home and publically you display negative qualities, which your children learn and carry with them into the public arena, as well.

I guess that the apple doesn't fall far from the tree, and if you'd ask, a snob would probably qualify this statement and say that their apple is a fabulous quality, the tree it fell from is thriving, the yard it fell into is beautifully landscaped. And even if you didn't ask, the snob would make sure that you heard their story.

But in fact, you don't have to stick around to hear it. You can each get out there and tell your own.

A (morning after) thought: You know that famous slogan "A mind is a terrible thing to waste"? Well, I think I will adopt it, with modifications, and print up some snobby designer T-shirts that announce: An Ego Is A Terrible Thing To Waste
Posted by torontopearl at Thursday, September 08, 2005 13 comments: