Place during the war
TARNOGROD,BILGORAJ,LUBLIN,POLAND

Type of material
Page of Testimony

When my father was in Israel for the first time some years ago, he and my mother went to visit Yad Vashem. Upon entering his mother's name, he came across this listing, to his utmost surprise. A former neighbor had thought to list my grandmother in the Yad Vashem records and my father was overwhelmed and grateful. Unfortunately, when he tried to contact that neighbor who'd given my grandmother's name, he learned from her daugher that she'd already passed away. He had wanted to thank her....for remembering and for giving my grandmother some kind of final resting place.
Posted by torontopearl at Thursday, November 20, 2008 5 comments: 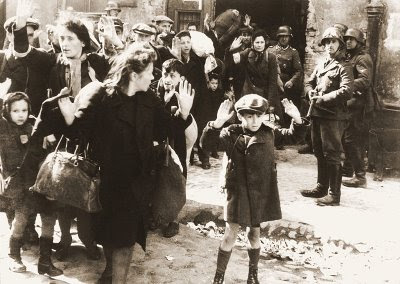 THE WALLS OF THE GHETTO
The walls of the ghetto encircled you.
The walls of the ghetto enclosed you.
The walls of the ghetto framed you.
Framed your life and the lives of your loved ones.
You, with your tattered yellow star marking you
Jew. Schweinhund. Part of a damned nation.
It is fear that fed you when the cupboards were bare.
It is bravery that sustained you when that fear was spent.
You fought to the bitter end --
The rat-tat-tat of machine gun artillery
echoing off the barren walls of that wasteland.
The raining of bombs all around you.
The smell of death hovering... Always hovering.
With hands up in the air, with this gesture of surrender,
of final supplication
You the boy, already a man, left your legacy.
And we remember. We always remember...
Posted by torontopearl at Tuesday, November 18, 2008 4 comments:

Has it ever occurred to any of you how many times you've gone to weddings, bar mitzvahs, bat mitzvahs, engagement parties, retirement parties, staff parties, etc, have posed for pics or have had candid pics taken of you when you weren't aware of a photographer around...or have sat at a table with people at any of these types of affairs and have had a microphone shoved in your hand and a video camera with the spotlight on you. You're supposed to give a congratulatory message to the new happy couple or to the shining boy of thirteen or the sparkling girl of twelve.

Have you ever thought about all these pics and footage taken of you....that you've never ever seen?

No doubt you've already reached your total 15 minutes of fame in these many simcha videos...but never actually got to see them.

No doubt your face fills up pages in photo albums on coffee tables and on bookshelves...but you never actually got to see them.

I think the next time I go to a simcha and the videographer goes around to each person at the table to say a few words, I'll put up my hand and say really loudly, "Sorry, I'm on strike."

And when asked to pose for a group shot, I'll put up my hand and say really loudly, "Can't do it. I need to sign a model release...do you have one handy?" (of course they won't)

And when it's the end of the evening, and time to say goodbye and mazel tov to the hosts, and time to hand over the envelope with the "gift" (check), I'll put up my hand instead and say really loudly,"I can't give this to you unless you promise to invite me over to see the pics/video once they're ready..."
Posted by torontopearl at Monday, November 10, 2008 3 comments:

'The JewBerry': Praying every day on the PDA

Thousands of observant Jews around the world are praying three times a day - using their PDA.

A software program for BlackBerries combines Hebrew prayers and technology, the brainchild of two entrepreneurs who attended New York's Yeshiva University. They dubbed it "the JewBerry" - a $30 program that provides texts of daily prayers instead of the traditional, printed book. The program is not linked to Research in Motion Ltd., maker of the BlackBerry.

"Throughout the day, Jews gather in office-building stairwells and conference rooms to pray, and while sometimes you might not remember your prayer book, no one goes anywhere without their BlackBerry," says co-creator Jonathan Bennett of Cedarhurst, Long Island. Among JewBerry users is the president of Yeshiva University, Richard Joel. "I love it, because now I can not only look how the market is doing, but I can also say my evening prayers," he says, adding that "at the heart of what Yeshiva is about is the notion that it's not our technology that informs civilization; it's our values."

I'm a mom who likes to stay on top of things if I can, even to the point of knowing what my kids wear to school. But it is obvious that not all parents are like me.

On Friday, when I came to pick up the kids, my youngest ran to the car without his jacket; he'd forgotten it in the schoolyard and went to retrieve it...but it wasn't there where he'd left it with his knapsack and lunchbox. He checked the lost and found, as well as his classroom, but it wasn't there.

There was, however, a very similar jacket, just a shade darker, lying there on the cold concrete near to where my son had left his jacket. Believing that there had been a switchoff done in error by a kid, I took that jacket, assuming and hoping that my son's jacket would appear in the school's lost and found on Monday and I'd leave this jacket in its place.

I got home and looked closer at the jacket; on first glance, it really looked the same as my son's, but a shade darker, a different store label affixed to it and a couple sizes smaller than my son's. And there was no name.

My son's jacket does have his name and phone number, so it's easily identifiable.

If in fact, this was a case of mistaken jacket identity, I couldn't understand that a parent wouldn't notice the difference in jackets or spot our family name in our jacket.

So throughout the weekend, I hoped I was correct and that Noam's jacket would show up in the lost and found on Monday or Tuesday.

It didn't...but I did the right thing and left the other jacket in the lost and found.

But you wouldn't believe the items that appear in those big baskets, just waiting to be claimed by their rightful owners.

There are countless school uniform jackets, and designer jackets, hats and gloves, and lunchboxes.

Please tell me how a child, however old or young, can lose a lunchbox and not realize it or not have a parent realize it or think, "Perhaps my son/daughter left it at school. I'd better check the lost and found." Does a child not think that they need a lunchbox for the next day? And if the lunchbox is labeled, as I saw on several of them, it is so much easier to claim.

Okay, so the school jackets all look the same, but many are labeled. Don't you think to even give a quick peek in the lost and found?

I recall losing a winter hat when I was in kindergarten. I looked in the school's lost and found many times without success. When I was in grade one, I checked it again, and what do you think I found? Yes, my hat. Better late than never...!

Each term, I believe, before Chanukah, Pesach and the end of school, the administration takes a day and displays all the lost and found articles for parents/kids to come and look at and claim whatever is theirs. All the items that go unclaimed are donated to charity.

Perhaps it's somewhat silly to think that a kid didn't bring a lunch to school for three months 'cause her lunchbox went missing; perhaps a child's fingers were numb over the month of February because his gloves went missing when the weather was cold. But it's sillier to think that people don't even consider checking the lost and found until it's too late.

I'm still hoping my son's jacket will turn up at school. In the meantime I told him to keep an eye on the kids in the schoolyard and see if he spots anyone wearing what looks like his jacket. If he spots it, he is not to accuse anyone, "That's MY jacket," but to say rationally that he thinks it's his jacket and let him check it for his name.

I'm also hoping that by the first "clean sweep of the year" of the lost and found, most of the items will have already been rightfully claimed by students, nannies, and parents.
Posted by torontopearl at Tuesday, November 04, 2008 No comments: