Something to Kvell About 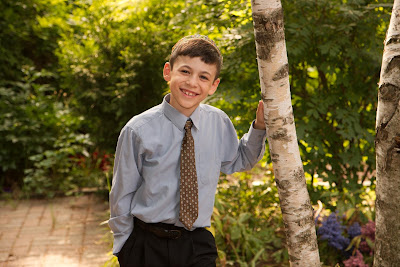 A week ago, on Shabbos morning, my nearly 9-year-old son gave a d'var Torah on the parsha, after davening...the youngest member of our shul to have ever done so. He'd prepared the d'var Torah for his Hebrew class the day before and was willing to repeat it in front of our congregation.

What a pleasure to see! My daughter, who sat beside me, asked, "Eema, are you crying?" I think my eyes just naturally teared up, but I wasn't overtly crying.

"Yasher Koach" was the common refrain to Noam and "Mazel Tov" is what Ron and I heard. What a pleasure.

Later in the day, at seudat shlishit at shul, it was I who gave a d'var Torah. I did one about two years ago about the Ner Tamid. This time my talk was about the Shechina, the Divine Presence.

I am absolutely not one to talk Torah off the cuff; it took me several days to research and prepare my drasha, and in doing so, I felt as if I'd been transported back to my university days, when I was preparing essays for any one of my Jewish courses.

I've thought about the topic of the Shechina for quite a while...my eyes have been drawn to it in the siddur during the Yizkor service, when it talks about "Al kanfei haShechina --On the wings of the Shechina." The wording and imagery always captures my imagination, and that is what triggered this d'var Torah.

It was well-received by my audience, and I look forward to finding another topic in the future that will stir my curiousity enough to do research and will give me some "food for thought."

One of the shul members approached me later with his favorite part of the d'var Torah: "The Kotzker Rebbe, Rebbe Menachem Mendel of Kotzk, was once asked, "Where is G-d?" And he replied, "Wherever they let him in." And such is the Shechina: the Divine Presence of G-d that dwells among men...in their sanctuaries, in their homes, and in their hearts.

I hope that the Shechina finds its place in your lives...
Posted by torontopearl at Sunday, January 25, 2009 7 comments: