Tomorrow night, our eldest, Avi, will be graduating from middle school -- grade 8.

In my day, we called it junior high; in my day, graduation took place at the end of grade 9. Grades 7, 8, 9 comprised junior high. These days, grades 6, 7, 8 comprise middle school.

I still remember September, 9 years ago, taking Avi to school for senior kindergarten. At the time, I was still on maternity leave, till October, with my youngest son, Noam. I would take Avi, and shlep the baby in his carrier till Avi was settled in the school yard with his friends.

He's a good boy, who still needs to discover the world, take it by the horns and make it his own. I'm hoping that it will come with maturity and more experiences -- perhaps high school will do the trick.

Avi, mazel tov on reaching this wonderful milestone. You are a mensch who makes us proud.
May you go m'chayil l'chayil (from strength to strength), and continue to be a happy boy, who has been known for years as "SMILEY." 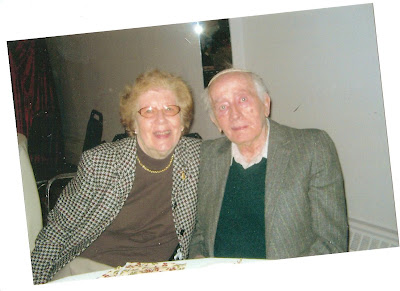 This photo was taken one Sunday morning in late December at a cousin's bar mitzvah. My father, as a Levi, was given an aliyah, and I believe it was probably his last one.

Father's Day is coming up this Sunday. Without my father.

My parents' 53rd wedding anniversary will be coming up on June 24. Without my father.

My father's 89th birthday will be on July 4. Without my father.

"Without my father." What a sad refrain, isn't it? But it's a reality these days, and once again, I am more than thankful for the many years we had WITH MY FATHER.

Hug your parents. Tell them how much you love them. Bring honor to the family name. Make your parents proud. Realize they are simply human -- like you -- and make mistakes, as well.

A Life in Pictures

My brother sent me this link to this wonderfully moving photojournalism essay.

Study each picture, study the words, study the facial expressions, study the love of a son for a father as depicted visually and via the written word.

In less than an hour, my oldest son will G-d willing turn 14 years old. Fourteen years ago on June 14, 1995, I gave birth to this beautiful 9 1/2 pound son in a very short time frame and with no drugs. Okay, lots of screaming on my part but no drugs.

You know what? Come to think of it, these days, there is still lots of screaming on my part but no drugs. I guess that's par for the course of having 3 children -- one teenager, one prepubscent daughter, and a nine-year-old.

Anyhow, I was just going through emails after Shabbos and there was one from Avi's orthodontist."A REMINDER FROM DR. SHAPIRO'S OFFICE said the subject line. I suddenly thought, "Does Avi have an appointment early next week that I didn't remember?" I opened the message and it said "Happy Birthday, Avi, from Dr. Shapiro and the team!"

I smiled and then thought to myself: this is not like a $3 or $4 Hallmark or American Greetings card, this is like a $5000+ card... After all, if it weren't for Avi's braces and dental work, Dr. Shapiro wouldn't even know our family -- or the birthday boy!

And I recalled other b'day cards we receive annually...from our financial advisor. Hmmm...those cards for myself and my hubby also come at a cost. It's more like an investment, I'd say.

I began this blog in late 2004...and am now at my 1000th post. Yes, the posts have slowed down over the past year or so -- not because of time restrictions, but because of not always having something to say, or to the other extreme, having TOO MUCH to say yet thinking "Who would want to read these inner-most deep feelings...maybe I should keep something to myself."

But in any case, this post is a tribute to the men in my life, for they are all good men with good hearts, generosity of spirit, and true menschlichkeit.

My father, Jacob, z"l, who passed away on March 8th, reigned supreme among these men. He led by example, he didn't practice idle gossip or slander or lies. He was a straightforward man, a decent businessman, and generous beyond his means. A loving father, a wonderful husband, he only knew how to give. Sometimes he simply reacted to circumstances, not completely thinking them through, but letting his warm self shine through.

Last night, when my husband did something really nice for me, along the same lines as my father would've done, I recalled this incident.

Some 25+ years ago, I had a summer office job, which I'd recently started. At the time there were some serious family matters going on, which often took my parents' attention. One day, around noon, I called and spoke to my mom. I then asked, "Where's Dad?" She didn't know, saying he'd just gone out with the car.

About 10 minutes later, the office door opens, and in walks my dear father...a smile on his face and a bowl in his hands. That bowl held cherries. "I washed them for you. I wanted you to have them." Now some people might think that was some kind of smothering parental tactic, but I say absolutely not. This example simply reflects who my dad was: he thought of something, wanted someone to have it, and made every effort to give that person that something. He took pleasure in others having pleasure.

I wish my father were around today to bring me another bowl of washed cherries...

Last night, I was attending my oldest son's baseball game. My husband had taken my youngest son to his game a couple hours earlier. It was very cold and I could've stood to be wearing a winter jacket and gloves while sitting on those metal benches. But not me, just a long-sleeved top, a hoodie on that and a light spring jacket.

I'd spoken to my husband and asked if he had any blanket in his car, which he could bring to me. He didn't, so I said forget it.

About 40 minutes later, I called home, wanting to know if he'd arrived home and to let him know that I was coming home for something warm. My daughter told me that Ron had already been home and left.

Not 10 minutes later, he's crossing the park field toward me with a blanket and two chair pads to sit on.

I turned to my friend alongside me and said, "That's Ron for you. And that's something my dad would've done too."

And I know that is something my two older brothers, Michael and Jerry, would have also done. They continually give of themselves, expecting nothing in return. We used to say that my brother Michael was most like my dad, but throughout my father's extended illness and hospitalizations, I realized that Jerry too was very much like my dad.

I am proud and thankful to say that my two sons, Avi and Noam, follow the Adler men in their demeanor. They are considerate, they are generous, they are sensitive to others' needs...and it all shows naturally.

May Hashem bless the men in my life to continue living life in the warm and generous way they do...just as my father did.
Posted by torontopearl at Thursday, June 04, 2009 5 comments: