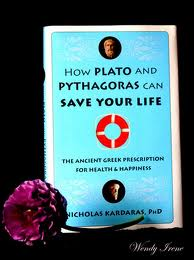 How Plato and Pythagoras Can Save Your Life: The Ancient Greek Prescription for Heath & Happiness by Nicholas Kardaras, PhD

This book, by Nicholas Kardaras, PhD, and published by Conari Press, is an exploration of mystical Greek philosophy and contemporary, cutting-edge science coming together in today's world.

At one time, Nick Kardaras was one of NYC's "50 Most Beautiful People" as voted by Vanity Fair. But with the passing of time and a steady addiction to drugs and alcohol, Nick's life was pulled out from under him.

With rehab, he managed to get his life back on track and had his whole future ahead of him, but the passing of a close friend drew him back into that dark underworld. He was found unconcious by his girlfriend one day and was on the brink of death, clinging to life with the help of a respirator as he lay in a coma.

But his life was given back to him -- a miracle in every sense of the word -- and with the return of his life, Nicholas began to explore the life behind him and the possibility of the life ahead of him.

He became a voracious reader and studied the works of ancient Greeks who promoted the importance of a healthy mind, body and spirit. These came together with the help of diet, exercise, meditation and contemplation...a real holistic approach to life.

Nicholas took charge of his life, incorporating all he was learning...and came out ahead.

With this book, Kardaras shares with readers those secrets of the famous Greek philosophers, and gives readers mental and physical exercises to do in order expand their creative imagination and gain insights about themselves and the world in which they live.

As Plato said: "Philosophy begins in wonder." And so does Nicholas Kardaras's journey. Join him on it, won't you?
Posted by torontopearl at Monday, May 30, 2011 2 comments: