A Sweetie by Any Other Name

Seen on the Scene

I am not going to public movie theaters this year because I am in my year of mourning for my father, but I do watch movies at home, on TV or on DVD, and late last night I watched much of one movie, and this morning, I watched the tail end of another.

I liked what I saw and would like to make recommendations. Throughout the day I was thinking of these films, recalling snippets of dialogue and action, character development, scenery, etc, and thus I continue to call such movies "thinking men's movies". It wasn't as if I saw them and they flitted out of my head almost immediately, as many films often do. Even though I caught the last 30 minutes of the film this morning, I was entranced and sorry I didn't get to see the complete movie.

They are not lighthearted films in the least, but heavy films. They paint a picture of a time in history, the hurdles people had to confront and how they met their challenges and created their futures.


Grab some popcorn, pull up a seat and watch these films....

The first movie is called "Black Book" or -"Zwartboek"- it is a film about a Jewish woman who becomes part of the Dutch resistance movement in WWII, and infiltrates her way into the Nazi regime. A powerful foreign film, not to be missed.

The movie that I saw a short bit of this a.m. was called "The Great Debaters" -- a drama based on the true story of Melvin B. Tolson, a professor at Wiley College Texas. In 1935, he inspired students to form the school's first debate team, which went on to challenge Harvard in the national championship. The plot touches on racism, lynch mobs, and the Depression.

If you can find the DVDs, watch the films, or if you've already seen them, do let me know what you think.
Posted by torontopearl at Tuesday, September 29, 2009 1 comment:

...And on Yom Kippur It Is Sealed 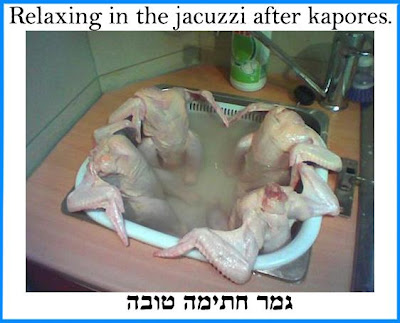 ...may you all be inscribed in the Book of Life -- for a year filled with good health, happiness, sweetness, success.

As you become introspective and daven hard so that your tefillot will be heard and answered, think about one thing you can do to change in the coming year, to better yourself or the people and place around you.

Baby steps in making a change can equal one big step. I wish you success in taking that first step.
Posted by torontopearl at Friday, September 25, 2009 2 comments:

I'm a blogger. I'm a Facebooker. I'm linked to Twitter, but haven't tweeted yet...although my brothers used to call me a "twit" when I was a kid.

I am now addicted to some Facebook games, namely Jewel Puzzle and Bejeweled Blitz. I spend a lot of time, often in the darkened hall, late at night (such as now!), searching out the similar shapes on the screen.

In playing these two games seriously and somewhat competitively these past couple of weeks, I've come to realize that the games somewhat mirror life:

-- life can be colorful and sparkly, but can sometimes mislead you

-- things move quickly, and if you want to stay in the game, you have to learn the rules

--sometimes you don't quite know what you're doing, but if you hit a few of the right buttons, you can make things work

--patience is necessary at all times

--all the jewels in the world don't always make you happy

I challenge you to become "bejeweled" like me...and help put your own life in perspective.
Posted by torontopearl at Monday, September 21, 2009 1 comment:

As I stood in shul on Shabbos and Sunday, I thought about my dad.

As I heard the calls of the Shofar awakening us to doing Teshuva in the final days before the book is sealed, I thought of my dad.

At one point, I had a random flashback. I recalled my family shul, when services were over and the women would walk down the stairs from the women's gallery to the main level to find their family members. My mother and I would walk down, caught up in the clusters of womenfolk, and I would scan the lower level for my brothers and father. And when I'd reach my father, we'd exchange kisses and I'd be wished "Gut yontif. A gut yohr."

I miss that. I guess I always will.
Posted by torontopearl at Monday, September 21, 2009 2 comments:

This is the end of our year


We hope it did bring you good cheer


Now it is time to prepare


Rosh Hashanah is upon us -- beware.

Take all your acts that you've done


Review them each, one by one,


Improve them so that you can be...

Shana Tova to each and every one of you. Have a healthy, happy, prosperous and SWEET year.
Posted by torontopearl at Thursday, September 17, 2009 1 comment:

Sometime between now and February, a headstone will be going up for my father.

He passed away on March 8th, the 12th of Adar, after declining health, primarily related to head trauma and seizures.

I find it almost incredible that in some circles, the headstone goes up within the first month. How does one find the strength in them to plan, then order, then carry out such a vital part of post-burial.

My mother is having trouble thinking about even ordering a stone, much less organizing the unveiling. "It seems so final," she says.

Unfortunately, it is final. Every day without her husband/my father/our "Zaydie" in our lives makes it a finality of sorts.

I am forever seeking out passages from the Bible that I can suggest to the family be put on his stone...something that will epitomize the man that he was. A few short lines will have to suffice, but in reality, countless psukim would fit. And as a Levi, he had his place of importance in shul, which can translate to an etching of a water pitcher on his headstone. The man was never far from his Tehillim (Book of Psalms), and that can be another etching. But the words....
And some years ago, it was decided that my father's headstone would also commemorate the lives of my father's mother and two sisters who perished in the Holocaust. The wording for that is also a consideration; although mention will probably be made on the back of the headstone, do we name names, or are we vague and just say "family"; if we name names, do we write them in Hebrew or English?
There really is no right or wrong when one has to order wording for a headstone. One just hopes that the message is clear: the person was loved by someone and his/her memory is to be honored in stone in a perpetual way.
May you all have a long life!!
Posted by torontopearl at Monday, September 14, 2009 2 comments:

I just finished telling you in my last post that it's often said (especially when it comes to writing/speaking) the straight -- not circuitous -- route from A to B is the best.

Just finished eating breakfast and reading the newspaper. Came to the horoscopes. Here's today's "forecast" for Libra, my sign:

The shortest route from A to B is not necessarily the quickest. Often, circuitous routes prove to be the most expedient. You're on the right path, even if it seems a bit slow.

After having read this horoscope, I realize it must be me -- not the path I'm on -- that seems a bit slow!
Posted by torontopearl at Wednesday, September 09, 2009 1 comment:

I don't live a very abbreviated life. I'm very detailed, descriptive and long-winded when I speak. I drag out doing chores and other things on my T0 Do list. I simply do not get "to the point" in conversations or even in blogs. But today I will.

Over the years, I've been told over and over "LESS IS MORE" when it comes to writing. Instead of taking a circuitous route to get your piece from point A to point B, you take a direct one and say what you have to say. Your words will likely have more impact, I'm told, and will keep your reader's attention.

So here is a personal essay about this subject: