An Avocation for an Advocate

I recently completed copy editing a novel written by a lawyer. It was not his first novel. His first novel was published last year and well-received. No doubt this second novel will be quickly picked up and published, perhaps by an even bigger publisher than the previous book. I understand he's already working on his third novel.

Two months ago, I completed copy editing a novel written by another lawyer. It was his first novel...but not his first attempt at writing. He was a journalist with the New York Times for several years in the mid seventies to early eighties. I understand he's already working on his next novel.

Both these lawyers are superb writers. Is that mere coincidence? Do lawyers go to the Writing School of Scott Turow or the John Grisham Academy of Writing? Do they have so much "downtime" to work out plots and characters, all the while interspersing some good courtroom scenes and downright nasty lawyer behaviors in their books?

I know another lawyer -- a former lawyer -- who no doubt was very good at his job. But he also heard the calling to be a writer. Not only is he a writer for himself, he is a writer for others: a ghostwriter... And let me tell you, he is another superb writer.

I'm fascinated by these lawyer-writers I've been dealing with. And apparently legal fiction writing is a big deal, even offering writing symposiums.

And then, some lawyers become not just writers, but bloggers:
After (Billable) Hours, Lawyers Moonlight as Bloggers
By Cameron Stracher
From The Wall Street Journal Online
The recent disclosure (by the New York Observer) that the anonymous legal blogger Opinionista is 27-year-old former law-firm associate Melissa Lafsky -- following the recent disclosures (by the New Yorker and the New York Times) that former prosecutor David Lat was the voice behind the blog Underneath their Robes and that former Harvard law student Jeremy Blachman penned the blog Anonymous Lawyer -- raises a question. Are all lawyers secret bloggers, frustrated writers or both? More important, should they keep their day jobs?
Lawyers and blogging go together like witches and stoning. According to a survey conducted by blogads.com, lawyers ranked fourth among both readers and posters to blogs. Many of the best- known blogs, such as instapundit.com, are run by lawyers. It's easy to understand why blogging attracts the J.D. set: Few professions combine as much creative talent with so much mind-numbing work.
Each year thousands of otherwise perfectly normal college graduates with perfectly worthless degrees in the humanities venture into law school in the hope of landing a paying job that requires no science and little math. Many have been encouraged by college counselors who have told them that law school will "keep their options open" -- code for delaying the inevitable for another three years -- and it pays better than academia.
Law schools feed this myth because they need paying customers, even as the members of their own faculty are refugees from the very firms to which they are sending their students. Upon graduation, however, many students find that the entry-level jobs they get are little more than glorified secretarial positions. Sure, they pay well, but how many paper clips can you remove from a stack of documents before you start questioning your entire existence?
In the dark hours, writing seems like a natural escape. It's what most lawyers do (when they're not reviewing documents), and though blogging is very different from drafting a prospectus, it's close enough to fool many lawyers into trading one form of verbiage for another. Writing a blog can also be done in secret, on your own time (or during office hours if you're careful), and it is potentially lucrative (if you can get some ads or make a name for yourself). For many lawyers, writing is also their true love, a dream they had before financial concerns and parental pressure drove them into drudgery. Some turn to nonfiction, hoping to transform their legal meanderings into punditry. Others (myself included) seek to channel their inner McInerney by penning the next great American novel, or at least a best seller.
The first generation of lawyer/writers, like Scott Turow and John Grisham, were able to blend law and writing (even now, Mr. Turow practices part-time). The second generation seems to want only to avoid practicing law at all costs. Mr. Lat, for example, essentially forced his employer to dismiss him by posting comments about some of the judges before whom he appeared (though he denies that he was fired). He now writes for the blog Wonkette.com, a Washington gossip site made notorious by Ana Marie Cox. Mr. Blachman wrote screeds in the voice of a fictional law firm partner that effectively made him unemployable by any major firm, then unveiled himself to the Times. His novel will be published this summer by Henry Holt. Ms. Lafsky told the New York Observer that she outed herself to "forc[e] myself to really make a career in writing work." In January she signed with a literary agent at ICM and quit her day job. She is writing a novel.
We should applaud their efforts to escape a profession that has one of the lowest levels of job satisfaction. If money is the goal, though, these lawyers might be more successful if they played the lottery. Legal-thriller writer Lisa Scottoline once told me that she wrote her first book as a way to earn some money following a divorce. She succeeded in spite of her naïveté.

Most writers will not see a cent from their efforts. Those who do will quickly realize that they cannot survive on books alone. Instead, law will pay their bills while they toil in obscurity, learning a cold, cruel lesson about the realities of the publishing industry: It takes more than a cup of coffee and a laptop to write a good book.
It also takes more than a blog. While the breathless form of the Web diary might work to titillate readers as they surf during their lunch hour -- particularly when the author is anonymous and dangerous (to himself, if not to anyone else) -- holding a reader's attention over the course of 300 pages requires a different skill entirely. The same unattributed gripes and gossip feel random and weightless strung together page after page (one reason perhaps that Ms. Cox's novel has not been particularly successful). Quotidian blog entries succumb to what the late author Frank Conroy called "abject naturalism," the agglomeration of details devoid of larger structure. Without a clear narrative thread, a blog is simply sound and fury, signifying nothing but misplaced ambition.
Good writing, contrary to the advice of your creative writing teacher, is about more than what you know. The world these writers are trying so desperately to flee is not a world any of us would want to visit for more than five pages: the overbearing boss, the dehumanizing office, the mindless drudgery. It might have worked for Kafka, but only after he turned himself into a cockroach.
The lawyer/writers who have succeeded -- Mr. Turow, Mr. Grisham, Ms. Scottoline and a handful of others -- have done so because their worlds are so unlegal, or illegal. After all, it's not every new associate who finds that his law firm is controlled by the mob (as was Mr. Grisham's in "The Firm") or every Supreme Court clerk who is tricked and then blackmailed into disclosing pending decisions (as was Brad Meltzer's in the "The Tenth Justice") or every defense attorney who has to represent her professed twin sister (as in Ms. Scottoline's "Mistaken Identity"). Law is just an excuse for a venue in these books, not its raison d'être.
Unlike unhappy families, unhappy lawyers are all unhappy in the same way. A happy lawyer, now there's a story worth telling. Start a blog!
-- Mr. Stracher is publisher of the New York Law School Law Review and author of "Double Billing: A Young Lawyer's Tale of Greed, Sex, Lies and the Pursuit of a Swivel Chair

Hmm...now I just need to know if being a blogger and a writer...will automatically make me a good lawyer??? 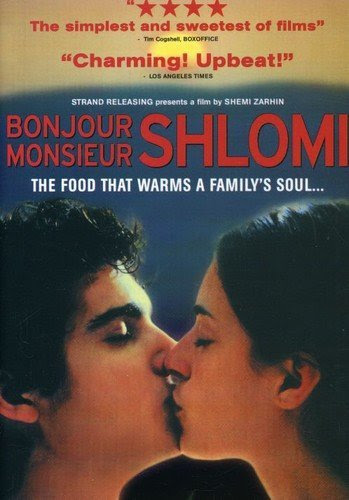 I just finished watching this film with my husband. As I've said before, I'm sure, he and I have trouble agreeing on films. I'd taken this one from the library a couple weeks back and waited for a time that we could watch it together.

My husband agreed to watch it tonight, but preempted me with a warning that he didn't think he'd sit and watch the entire thing...thinking he probably wouldn't enjoy it.

HA! He had to eat his words -- he enjoyed it, as did I. This Israeli film, which was distributed just three short years ago, is very enjoyable -- somewhat sad, somewhat funny.

It had been released to mixed reviews throughout the U.S. and Canada, as I discovered on the Internet, but my review is that I give it 4 stars out of 5. By the way, the Hebrew name for the movie is "HaKochavim shel Shlomi," which translates to "Shlomi's Stars."

Yes, stars figure in the story line. And something else I noticed from the onset of the movie is that the color BLUE figures throughout, as well. The stars, and the color blue, are later mentioned by a central character in the film, so these were meant as metaphors.

If you don't mind subtitled films, I (and my husband) highly recommend this one.
Posted by torontopearl at Sunday, February 25, 2007 No comments: