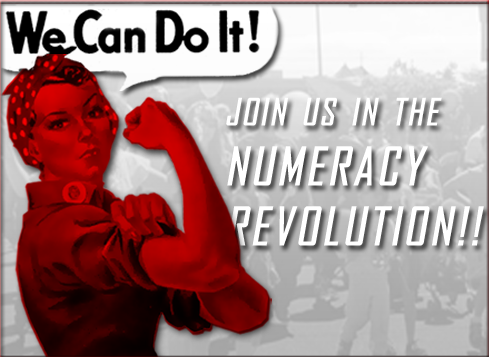 I am not a numbers kind of gal. I never was.

Give me letters, give me words. And I'm happy.

Math was NEVER my forte--in fact, I'd wanted to drop math in my later years of school, because I was just passing the subject. But thanks to parents who took an interest and told me I should perservere, thanks to my switch to public school for my last few years of high school, where I could take general, advanced or enriched math and work better at my level of comprehension (can you guess which level I pursued), I stuck with it.

Oh, I don't do anything with the math I learned; I can add, subtract, multiply, divide and do math basics as fast or faster than any of you can, but get into weird nitty-gritty things, and I'll have to call Stacey or Doctor Bean to help me out.

Okay, Pearl and numbers don't mix. So why did I end up marrying an accountant? Okay, definitely not a boring accountant -- perhaps that's the reason why...

So anyhow, as I stated, numbers don't normally do anything for me, and I avoid them if I can. So why am I taking such great pleasure in such a simple thing as reading the number of comments for my last couple of posts?! I think it's because the numbers have gone from the average 0 or 2 to a way-up-there 11 and 12...and not even all of them my comments adding to the total!

I've said it countless times I'm sure in my blogging tenure: why is it that when I write good, heartfelt creative pieces, there are 0 comments, but the minute I write something even a touch fluffy, that number speedily changes?

But I do care about comments...the number of comments I get.

Who'd have ever thought that Pearl's love of words and Mr. Abacus's (a Sephardic Jew, no doubt!) love of numbers would have finally come together...to meet on the same page!?

You may now choose to make a comment, thus a way to leave your number at the same time! All comments will be read, and numbers will be tabulated at the end of the day. Thank you.
Posted by torontopearl at Wednesday, January 11, 2006 23 comments: