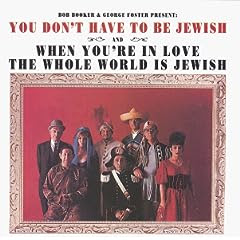 Driving in the car today down Toronto's "Jewish" street -- Bathurst Street -- I was with my two younger children. My youngest, who'll be entering grade 1 next week, G-d willing, is actively reading anything and everything, including signs.

Out of the blue, he announces to his sister and me, "The whole world's Jewish."

Both his sister and I say no. She explains nicely that not everyone is Jewish; people go to church and not just synagogues.

The little guy was adamant but gave in after a while. "Okay, maybe not the whole world. But all of Toronto is Jewish."

I said, "I don't think so... Yes, there are a lot of Jews here, but neither the whole world or all of Toronto is Jewish."And his sister also tried to convince him of the fact.

He relented. "Okay, but some of the people are Jewish."And with his next announcement, I understood from where this entire dialogue had materialized.

(cross-posted on Our Kids Speak)