Spielberg, Eat Your Heart Out

I was just reviewing old emails and and came across one that mentioned a link with which I'd had a lot of fun.

I think you will too!

Try it. You never know: you might just be a really good filmmaker.

All My Loved Ones 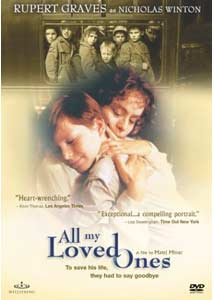 My eyes are still damp from a movie I finished watching about twenty minutes ago: "All My Loved Ones."

It's another foreign film -- Czech -- but with no traces of quirkiness, only a sense of seriousness and a slight heaviness, as we know this film mirrors life...as it was for Czech and other Jews of Eastern and Western Europe and other countries with the onset of World War 2.

Perhaps the acting is not supreme and maybe some of the details of the film lack a certain "je ne sais quoi," but I do recommend the film for its sense of realism.

The film is directed by Metej Minac, who is the son of a child who was on the kindertransport, and is based on his mother's recollections.

The copy on the movie cover says: "To save his life, they had to say goodbye."

Just think of how many parents had to say goodbye....
Posted by torontopearl at Sunday, July 01, 2007 1 comment: