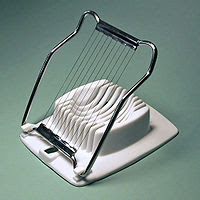 why kids are so fascinated by this, why they are so gung-ho to eat hard-boiled eggs...when this object is on the table?
Think about it: it's a knife of sorts. As Wikipedia explains: An egg slicer is a food preparation utensil used to slice peeled, hard-boiled eggs quickly and evenly. An egg slicer consists of a slotted dish for holding the egg and a hinged plate of wires or blades that can be closed to slice.
My kids -- and their friends -- get very excited when I offer them hard boiled eggs. The "oohs & ahhs" are audible when the egg slicer accompanies the bowl of cooked eggs to the table. They argue about who will be the first to use the slicer, which way they should position the egg in the slicer, if they should double-slice the eggs to make them really small pieces, ie. messy crumbs aka prelude to egg salad.
I haven't yet shared a secret about the egg slicer with my kids and their friends: it can also be used for mushrooms! Shh...don't spill the beans, um, I mean the egg, um I mean the mushrooms.

Yesterday was my daughter's bat mitzvah. She gave a d'var Torah at shul after davening, and we had a kiddush for the congregation. Then our family and some of my daughter's friends came back to our house for lunch.

I gave a d'var Torah; I didn't realize that I would get choked up and would falter, having to stop a few times to reel in my emotions and gather myself. A simcha isn't 100% a simcha when some very important people in your life are missing. Memories and feelings surface even from the deep subconscious and control one's thoughts and emotions.

My daughter is twelve. Sadly enough, her Savta and Zaidy were not there in person to share her special day.

Good Shabbos, family and friends, and thank you for joining us today.

Sixteen years ago, in 1993, I spent Shabbos Nachamu, which fell on the last day of July, at the home of who was to become my future mother-in-law, Liora, z”l. When I called home after Shabbos, my parents asked me, “Any news?” They were hinting at whether or not I’d gotten engaged over Shabbat. The answer was “No.”

Four years later, I spent Shabbos Nachamu at home, and the last 45 minutes of that Shabbos were spent at North York General Hospital, on the Maternity floor, with 20 of those 45 minutes being given over to giving birth to my second child.

When told, “It’s a girl!” my immediate reply was “I fished my wish!” And when Shabbos was out some twenty minutes later, we were able to call my parents and my mother-in-law and answer the “Any news?” question with a resounding “Yes” and “Mazel tov!”

From the time that I was a young girl, growing up with brothers, I’d always hoped that a daughter would be in my future. I’d wanted to be able to name a daughter after my father’s, z”l, cherished youngest sister, Meriam, who perished in the Holocaust.

Our own Meriam – Adina Meriam, to be exact – is equally cherished.

Finding herself between an older and a younger brother, Adina has grown up learning to be a little tough and defend herself, while at the same time, showing her delicate, sensitive, all-caring side, a true reflection of her first name. Yes, there may be bickering and hormone-related arguments regularly ensuing in our home between Adina and her brothers, but a camaraderie definitely exists and I’m hopeful this kinship will develop strongly over the years.

My daughter has the same blue eyes & freckles I have. But for the most part, our similarities are mainly physical. Growing up, I was quiet, an introvert, insecure in my surroundings. Adina, on the other hand, has proven herself to be -- from a young age -- very social. Always happy among others, laughing, sharing secrets, making others feel secure in their surroundings, and instantly becoming friends with strangers.

Adina loves to draw and read. It doesn’t matter how many times she’s read the same book from cover to cover, but if she’s enjoyed it, she’ll read it yet again. The Harry Potter series is just one example.

Her creativity comes through in her artwork, in her flare for fashion, and in her very detailed conversations, stories and image-filled poetry. Ah, a girl after my own heart…

We recently returned from a family trip to Israel. After so many years of not being in that wonderful country, Ron and I got to experience Israel not only from our own points of view, but from that of our children, as well, who were experiencing Israel for the first time. It is evident from Adina’s photos and conversations in Israel that she took it all in, observing fine details with her “Adina viewfinder.”

This week’s parsha, Ki Tetzei, teaches numerous mitzvot, such as: returning lost items to their rightful owners; loaning money to one's fellow Jew free from interest; what one is permitted to or prohibited from taking from another Jew as loan security, shatnez (wool and linen together); tzitzit; and dealing fairly and truthfully with one's fellow Jews in business. The Maftir aliyah of our parsha tells us collectively to remember, for all time the actions of Amalek, who attacked B'nai Yisrael when they were weak, while blotting the remembrance of Amalek from the earth. We remember the Amalek without, as well as the Amalek within; lo nishcach v'lo nislach - we won't forgive and we won't forget.

The parsha speaks about other mitzvot, such as sending a mother bird away before taking the young or the eggs, helping one's fellow Jew load and unload a burden, fencing in a roof area, and not harnessing together different species of animals on the same yoke.

In short, our parsha emphasizes the unity that evolves from collective responsibility, kindness, caring and fairness for and with each other. Among many of the taught mitzvot, compassion and protection are common themes.

Mazel tov, Adina, on becoming a Bat Mitzvah. We love you!!
Posted by torontopearl at Sunday, August 30, 2009 5 comments: