With a Nod to Carol Burnett

"I'm so glad we had this time together
Just to have a laugh or sing a song
Seems we just get started and before you know it
Comes the time we have to say 'So long.' "
So long, 2007.
Here's lookin' at you, 2008.
I'll be good to you; will you be good to me?
Fellow bloggers: may your 365 days of 2008 be filled with sunshine and sparkles, blessings and good fortune, good health and good friends.
Posted by torontopearl at Sunday, December 30, 2007 2 comments:

...And Now a Word From Quinn Cummings

Being in the publishing arena for so many years, I know all about copyright laws, but I was faulty in acquiring any publishing permission from Quinn Cummings to repeat her words of wisdom about blogs in general. Forgive me, Quinn, but I found some reality in your words and want to share those words with my few readers. In fact, her post moved me to tears, and apparently it did so for some of her other readers, too. So at least, I'm not the only softie...

(What I'd really like to say -- but can't -- is that this brilliant writer "took the words out of my mouth"!)

...There is something about the
nature of a journal which makes it ideal for measuring and noting the time while
you wait for something to happen, and so many of you are writing about, and
living with, such challenging situations. My blog readers are living with
cancer, infertility, sick parents and sick children. It’s not all bad. You are
also living with new babies, new grandbabies, new marriages and new kitchens,
all of which are also carefully recorded. Some days, things are good. Some days,
they’re not. On the bad days, my readers of faith pray and write about their
comfort from that. On the bad days, my readers of less-than-faith find their
friends and their snack food of choice and write about their comfort from that.
But you blog-writers keep writing.

You write in frustration on
the days your teenage bipolar son has a bad reaction to his medication. You
write on the days they put your mother into a nursing home. You write on the
days they euthanize your beloved pet. You write in bad times, I suspect, for the
same reasons I do: because it helps you think, and while you don’t want to slip
completely under the warm water of self-pity, a few sympathetic words would feel
awfully nice. And every time I see how many people are out there, sitting in
their houses, reading the blogs of complete strangers and cheering them on, I
realize again what a strangely disconnected and oddly intimate thing a blog
is.

So, here’s my wish for my
readers in this last blog of the year. Whatever good thing you are waiting for,
I hope you get. I hope whatever thing you have struggled with this year
improves. I hope you get your one-year chip, your remission, your baby, your
house. If your wish is for a book deal, I hope you get that, along with a few
copper-bottomed pots to scrub while you think.

Happy 2008 and peace to all
people on earth.

The city is festooned with decorations and lights. The stores are filled with bustling crowds doing last-minute shopping. The liquor stores and supermarkets are overflowing with harried customers who consult their lists in hand.

The holiday music has been "adorning" the airwaves for close to one month. Normally I don't mind the music and have my own "favorites"...but this year I just seemed to be more aware of it...and actually tired of the music, and of those normally middle-of-the-road, adult contemporary stations who have now been playing Xmas music, 24/7 for several weeks. How many versions of "Ava Maria" are there? How many Jewish composers and singers have been making a mint off these holiday songs?

What is the stereotype activity for Jews to do on Xmas Eve or Xmas Day?

I think that going out for Chinese food has always seemed to top the list. Where and when did that originate, I wonder?

Then, for Jewish singles, there are always singles dances and parties held on those famous dates. Or open house parties for which the whispered address spreads like wildfire.

There are movies to be seen...but don't make the mistake of trying to see a late show, because there usually aren't any on those two dates.

There is the "Let's rent a movie and order in pizza" option.

There is the "Let's go ice skating" (lucky if a public rink is open) option.

Of course, there are the MIAMI BEACH/CARIBBEAN CRUISE/MEXICO/ISRAEL/NEW YORK CITY options for those who can afford to take the time and money to do those things.

But for people like us, there is a new option; the replacement for the Chinese food/movie/singles dance/house party/video/skating/big travel plans ( "I think not!") is.......

....travelling to Niagara Falls to go for a night or two to the hotels that offer a waterpark package for families. It's rather reasonable, certainly fun, less than a 2-hour drive from Toronto, bordering the U.S. border (just in case we want to head to Buffalo and vicinity to do some power shopping. We have a pretty good and strong dollar these days).

We took this trip a couple years ago, thought it to be great fun. Apparently, many others have discovered this quick getaway too, because we know several families (10 young families from one neighborhood congregation booked off 10 rooms at one resort hotel) who are marking Niagara Falls on the GPS and are heading there tomorrow and on Monday.

If we're driving on the highway tomorrow, I'm pretty sure that I'll look over at a couple other vehicles and will know someone in them or will see a few "kippa people" heading in the same direction.

So contrary to this YouTube link that I will leave you with, I think that there is something "for a Jew to do."
Posted by torontopearl at Sunday, December 23, 2007 6 comments:

It is rare for me to go to Costco or any of these humongous warehouse type city stores. I'm not partial to crowds, and honestly, I don't need corporate size stacks of cleaning supplies or canned goods. I am known to be most practical, aka the coupon queen, so my spending habits in supermarkets are rather tame. But let me loose in Costco and I might go haywire!

The other night my husband and I went -- primarily to get new tires for my car and to have them put on. In the meantime, while waiting, of course we went into the store and spent several hundred (some of them unnecessary) dollars! Some were frivolous buys, others were practical. But the truth is that for some things, Costco is not a great "metziah"; any local supermarket or department store offers better sales, even on individual items that you'll buy multiples of in lieu of one bulk item. Just ask me; I know these things.

It is most interesting to enter a Costco at the start of the holiday season and see the carts filling up fast and the holiday fever in the air. I take the time to see what people are buying and imagine scenarios in which they'll share these purchases.

Gigantic bags of frozen shrimp were in many carts. As was bottled water. As was toilet paper.

Hmmm...eating too much shrimp makes you thirsty, I guess...and then you need to go to the bathroom.

I saw people with industrial size bags of frozen french fries, ketchup cans, mayonnaise bottles, bagged lettuce, and I figured they own restaurants and buy supplies here at a supposedly cheaper cost.

Italian fruit cakes, packages of chocolates, electronic gadgets, games tables, jewellery piled up in shopping carts. Someone will be most happy this Xmas.

For our family, the Kosher meat section is ideal and we're lucky to have 2 full-size stand-up freezers and two fridge freezers in which to store the chicken and beef that we bought. But in all honesty, for many of the other great Kosher items that are offered in bulk for fridge and freezer, I wouldn't be able to store all the merchandise. So I left it in the store for someone else to buy.

So, I guess the moral of this post is: shop wisely (which is not necessarily a Costco thing), and if you are at Costco, amuse yourself by observing others and imagining how they use the merchandise they buy.

Have a good Shabbos.
Posted by torontopearl at Friday, December 21, 2007 2 comments:

Good Shabbos, everyone!
Posted by torontopearl at Friday, December 14, 2007 3 comments:

Everything You Ever Wanted To Know About PEZ (tm)...and More

I'm sure we've all had our fun with those dispensers in our childhood and youth. How many of you got your fingers caught in those little spring-loaded traps? How long could you make those little candies last? Not long, I bet. "I'll have just one more," was no doubt your popular refrain.

Check out the site... It'll make your day just that much sweeter as you walk down Nostalgia Lane.
Posted by torontopearl at Tuesday, December 11, 2007 3 comments:

I was thinking about my last post and realized that my son must've thought of Peter Sellers -- not as Hrundi V. Bakshi in "The Party" but as the famous Pink Panther himself, Inspector Jacques Clouseau.

And now a great line from "The Party":

C. S. Divot: You
mashuga!
Hrundi V. Bakshi: I am
not your sugar.

Posted by torontopearl at Tuesday, December 11, 2007 No comments:

A Case of Mistaken Identity

Bli ayin hara, my kids are pretty bright -- each has his/her own strengths -- and know a little about a lot...and sometimes a lot about a lot!
So I thought that perhaps my youngest son might know who the man was in the photo that I showed him.
"Do you know who this is?"
He nodded his head from side to side.
"No? You don't know who it is? I thought you might." (naive me thinks that everyone ought to recognize Einstein)
After a brief pause, he shrugged his shoulders and stated in a questioning way, "Peter Sellers?"
That cracked me up; he doesn't know Einstein, he knows Peter Sellers. A couple days earlier he'd watched the brilliant Peter Sellers movie, "The Party."
I guess my 7-year-old son knows that Peter Sellers is a man with countless disguises. But I'm not sure that brilliant mathematician is one of them!
Posted by torontopearl at Monday, December 10, 2007 1 comment: 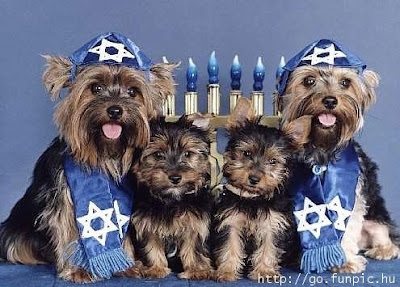