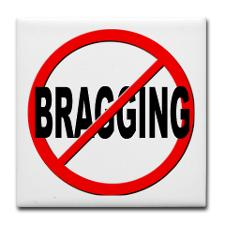 Maybe listening to braggers made me see what I was missing in life. These kids' parents bought them "things", gave them "things" that I might not have had.

I know of someone who brags constantly on Facebook...primarily about the trips they're taking: the whens and wheres and with whoms. I think that person must have lacked money as a child and now feels the need to let others know what they have in a materialistic sense. The person is also an idiot, if you ask me, advertising the details in a public forum, of when they'll be away on holiday...so anybody can have access to that information of when their house will stand vacant and for how long.

I know of someone else who married well and likes to place a price tag/ a reference to a tangible amount on everything she talks about: how many square feet her home is, the value of her home, the cost of the ring she recently bought. It so detracts from a conversation because it becomes superficial when all one does is affix $$$$$ signs to words.

Other people I know talk about their children ALL THE TIME. Yes, they're  the pride and joy and sometimes heartache of their parents' lives, but ALL THE TIME...? C'mon, does nothing else define you as a person besides motherhood?

I was taught as a child not to brag. When I was about 10 years old, I was going home with my brother and talking about my report card marks to him. His friend overheard and asked, "Are you smart?" I announced "YES!"at the same time that my brother said, "Yeah, she's smart." When I relayed that conversation to my mother, I was instructed not to talk about myself and my smarts; it was for other people to talk about. My brother was proud of me and answered on my behalf. That should have been enough.

Other times, I'd brag about where my family was going on vacation. On one or two occasions, those holidays got grounded and didn't happen. It made me look bad to the other kids.

I have learned by experience to not brag. Although my children and my husband are my pride and joy, I rarely talk about them, unless someone asks specifics or my telling certain details lends itself to a conversation.

Not liking braggers doesn't mean you're envious or jealous. It doesn't necessarily mean that you have a poor self image,either.